As usual before a Curborough I was keenly watching the weather forcast, as it turned out this wasn't a problem (for once). On the Monday it was lashing it down at Lichfield, and a very impressive thunderstorm hit in Peterborough about the time I would have got home. But the Tuesday was forecast to be dry and just overcast.

For myself the journey down was nice and easy with very little traffic encountered, however for those who were using the M1/M6 there were numerous holdups on the roads. Fortunately everyone bar one person who I knew wouldn't attend made the journey to the event.

As usual the bacon sandwiches were eagerly devoured when people arrived. Although it was dry and bright it still wasn't that warm - in fact most of us kept coats and jumpers on during the day.

Over the winter Curborough has undergone a small change. between the molehill and the finish straight there is now a linking section of tarmac - this allows us to run different configurations, more on this later.

The day started off nice and smoothly, a couple of sighting laps were performed which allowed us to get an idea of where the track went. For the old-timers this is just a memory jog whereas for those who haven't been before it is essential so they don't end up being part of the scenery!

There were a few mechanical mishaps, Eddie Cheung's R6 suffered from overheating as the radiator thermal switch had stopped working - I lent him a bypass switch to get the car back on the track. In the late morning James Castro's GTA was found to be dripping oil on the exhaust causing some interesting smoke to emerge from the wheel arches. Both of which were easily fixed. 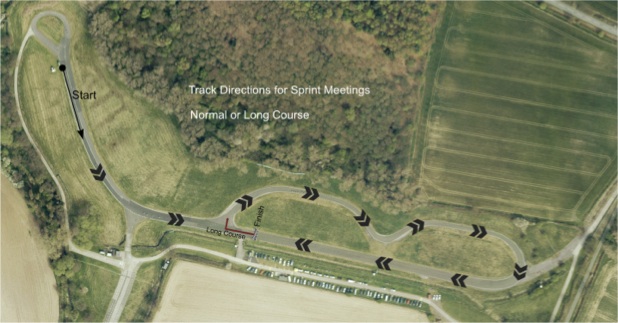 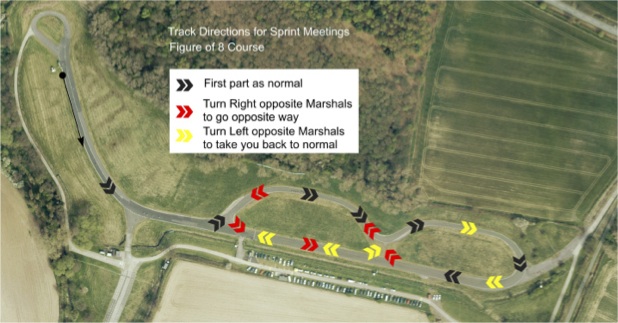 After lunch we changed the circuit path, The official long route is above, however we felt it would take too long and limit track time so we used a shorter version, effectively looping back on ourselves. the only problem with this layout is there isn't a clear finish line, so you had to ensure you backed off before the last corner.

We had a couple more mechanical issues - unfortunately with the same two cars as in the morning, this time Eddie's car developed a misfire but as he said it hadn't been run in anger for 3 years prior to coming out to Curborough, he decided to drive home early rather than risk any damage. However James' issue was more interesting - when sitting by the start waiting for his run the car lost power completely and shut down. A lot of tracing of wires seemed to be inconclusive until he got to the main power distribution block. It took a few minutes to get it sorted but it turned out to be a fairly simple problem. When the supply wire was put into the block the outer sheath wasn't stripped back far enough and the grub screw was pushing on the insulation. It appears the power was just running through a few copper strands tickling the brass block. A bit of work with some wire strippers and everything was back to normal.

The rest of the day passed without incident on the track and we all headed for home. This is where the problems for me started. After dropping off the keys I started getting holdup alerts on the satnav, driving down the A5 the traffic was crawling. When I stopped to fill up with petrol I found out why - There had been a serious accident on the M6, all the traffic had been diverted to the A5 (where I was) and then another accident occurred on the A5. The net result of this was it took over 2 hours to get back to Corby. During this I noticed the temperature on the car was rising when I was stationary, but as soon as I moved it cooled down so didn't think anything of it.

Then I reached Peterborough and found a major holdup on the A47 - resulting in being stuck between the A1260 and the Bretton exit. At this point the car had had enough and promptly overheated and vented a lot of boiling water on the road. It turned out the wires on the back of the thermal switch had come loose and then the fan wasn't starting. It had been working fine earlier so must have just vibrated off. A quick fix soon had the fan running but it took another 25 minutes to get to the exit I needed. Finally I got home 3 and a half hours after leaving Curborough - a journey that normally takes just over 2!

The good news is that the car wasn't damaged and everyone enjoyed the day. If you want to come to the next one (9th July) I only have 6 spaces left and they are going fairly quickly.